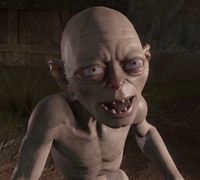 Gollum is one of the main characters in Shadow of War. Gollum first appears in the quest Knife in the Dark.

Seeker of the One Ring.

"My heart tells m that Gollum has some part to ply yet, for good or ill before this is over." -- Gandalf.

The One Ring dominates Gollum's every thought -- even though that ring is resting in Bilbo's pocket in the Shire, leagues away from Mordor. He wanders Mordor in pursuit of "Baggins" and the One Ring, staying one step ahead of the Orcs who dismiss him as a thriving pest.

Gollum's lust for the One ring draws him to the "Bright Master" Celembrimbor -- and by extension, Talion. Exploring Gollum's worshipful reverence for her. Shelbo uses Gollum as a spy and a lure for the nearby Orcs she feeds on. When she needs to draw Talion to her, Gollum makes an effective guide.

Gollum isn't strong, wise, or brave in the conventional sense, but he posses quick reflexes and a superior instinct for survival. He's survived thus far through preternatural trickery and a self-serving cowardice. And fate has a part left for him to play...