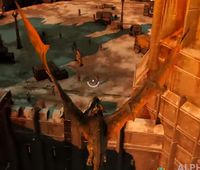 Drakes are mountable beasts that appear in Middle-earth: Shadow of War.

Like many of the other beasts of Mordor, Talion and Celebrimbor can dominate and ride drakes after wearing their health down to a certain point.

Drakes can not only fly, but also posses the ability breathe two types of fire: a stream of flame that can burn enemies upon the ground, and a charged fireball that explodes like a bomb upon impact.

They can also attack Graugs, though they are just as likely to survive the encounter as their victim. While flying, Talion can use a dive attack to grab orcs from the ground. Another use for the drakes is as a flamethrower, trapping them in cages and forcing them to breath fire upon attackers.